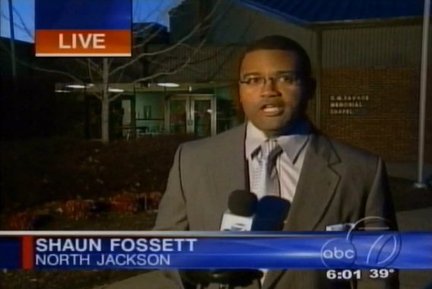 Shaun Fossett does it all: he anchors and produces newscasts. He shoots and edits his own video. He even directs newscasts and operates equipment behind the scenes. In high school he modernized the campus news program with the addition of teleprompters and digital video editing. In college he edited, produced, directed and reported for the journalism department's flagship newscast Insight, eventually moving to the anchor chair. While working for ABC7 in Jackson, Tennessee, he was the co-anchor/co-producer of newscasts on weekends while shooting, editing and producing five packages a week. It was in Jackson where he refined his leadership capabilities, directing a news crew in all aspects of newscasts, including graphics, editorial direction and even studio lighting.

He's not afraid of hard work; he lives for it. People want to know what's going on in their communities and Shaun Fossett has a proven track record of tirelessly pursuing the stories that matter. Whether it's exposing thieves who exploit tornado victims to investigating rising food prices, Shaun's main concern is informing viewers; he's never the news story, just the one who tells it.  He simply wants viewers to know that he takes his job very seriously, but not himself.

_
1. Television news has been entrusted to be the eyes and ears of society. TV news goes to the places I don’t have access to and talks to the people I would otherwise never meet.

2. Television news creates an immediate concern that print cannot produce. Seeing a tornado victim tell their story or hearing a citizen voice their concerns is what makes people take note and pay attention.

3. Television news can report events as they happen. A newspaper can only give me today’s news tomorrow.

5. Television news tells the stories that affect the most people and successfully explains to me why I should care.

6. Television news utilizes and embraces innovative technology. From fax machines to micro blogging, television news has a long legacy of blending all forms of available media. The term “electronic news gathering” will always be attributed to TV news.

7. Television news is universal; from the Ph.D to the warehouse shipping clerk, everyone simply “gets it”.

8. Television news strives in a competitive environment, which creates a better news product across the board and multiple choices for information.

9. Television news is best when delivered by people who have an intimate tie to the community in which they work; you must genuinely care about a community to effectively tell its story.

10. Television news’ central objective must be to inform viewers in the most accurate and engaging way possible.